Palazzo Colonna is one of the oldest and largest private palaces of Rome.
Its construction began in the fourteenth century by the Colonna family, who still resides there since eight centuries.
The Colonna family dates back to the twelfth century and comes from the town of Colonna, near Rome, from which it takes its name. 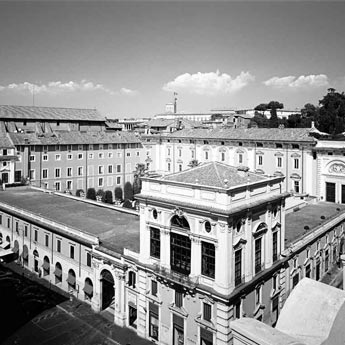 View of the Colonna Palace 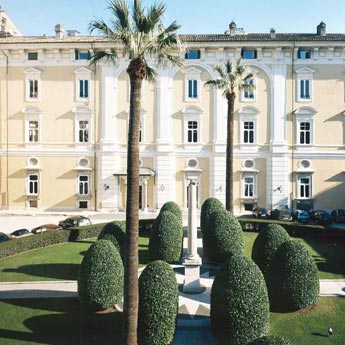 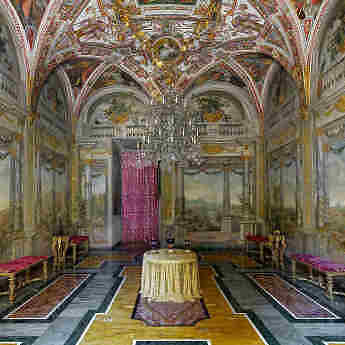 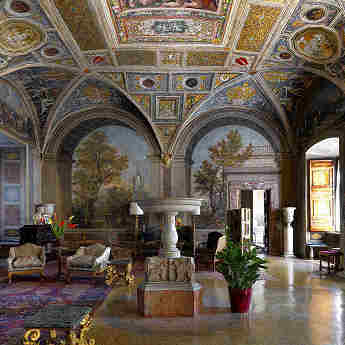 Hall of the Fountain 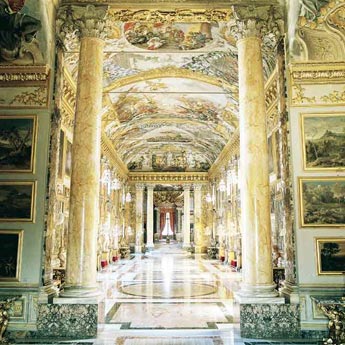 The construction of the various wings of Palazzo Colonna lasted for five centuries.  This has led to the overlapping of different architectural styles, interiors and exteriors, which characterize and reflect the different periods.

In those ten years, within the austere rooms of Palazzo Colonna, Pope Martin V designed and implemented a great plan for a cultural, urban and administrative rebirth of the city of Rome, which lay in devastating conditions after the period of papal exile to Avignon and the Western Schism.

In 1527, during the sack of Rome by the troops of Emperor Charles V, Palazzo Colonna was one of the few buildings that was not destroyed due to the good relationship of the family with the Empire.  Instead, it offered a safe haven for more than three thousand Roman citizens.

Throughout the 1600s, the Palace took the form of a large Baroque palace at the will of three generations; the leading family members being Philip I, Cardinal Girolamo I and Lorenzo Onofrio, who relied on architects and artists of great skill and reputation.

In fact, Gian Lorenzo Bernini, Antonio del Grande, Carlo Fontana, Paolo Schor, and many others, all lent their expertise.

Also during this time was the construction of the beautiful and majestic Galleria Colonna, which has 76 meters of length facing onto via IV Novembre.  This authentic jewel of the Roman Baroque is now open to the public, with apartments of major artistic value that are most representative of the Palace.  They house the Art Collections of the family, notified and bound by the fidecommesso of 1800, including masterpieces of absolute excellence painted by leading Italian and foreign artists between the XV and XVI century.

Among the artists are Pinturicchio, Cosmè Tura, Carracci, Guido Reni, Tintoretto, Salvator Rosa, Bronzino, Guercino, Veronese, Vanvitelli and many others.

Private visits of the Gallery and the private Apartments are always available by appointment seven days a week, including holidays.  Reservations can be made by calling +39 06 6784350 or writing to info@galleriacolonna.it.

There are a number of publications on the Colonna family, Palazzo Colonna and its Art Collections which you can find either at the book shop on Saturday morning in Galleria Colonna on Via della Pilotta 17, or at the offices of the Galleria Colonna.

Thank you for your attention and we invite you to visit this historical Roman residence of great charm and rare beauty.