A true jewel of Roman the Baroque, the Galleria Colonna was commissioned in the mid 1600s by Cardinal Girolamo I Colonna and his nephew Lorenzo Onofrio Colonna. It was inaugurated by Lorenzo Onofrio’s son, Philip II, in 1700. 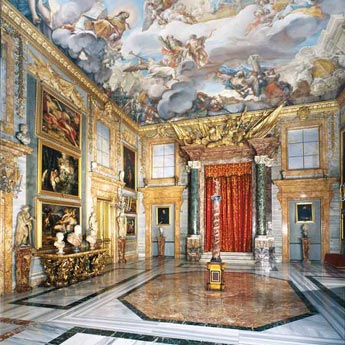 Gallery, Hall of the Battle Column 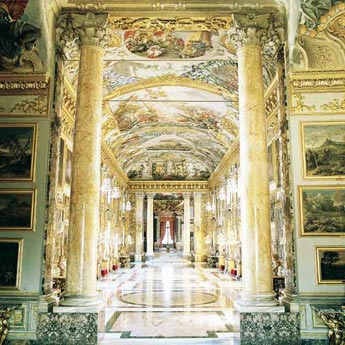 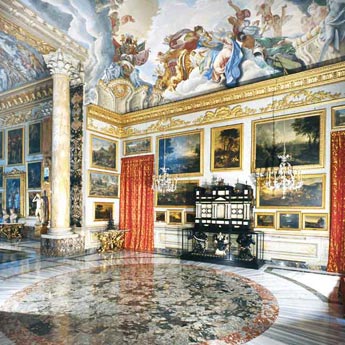 Hall of the Apotheosis of Martino V 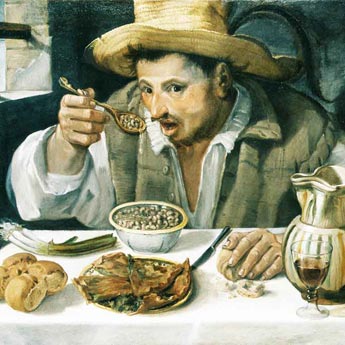 A true jewel of the Roman Baroque, the Galleria Colonna was commissioned in the mid 1600s by Cardinal Girolamo I Colonna and his nephew Lorenzo Onofrio Colonna. It was inaugurated by Lorenzo Onofrio’s son, Philip II, in 1700. The original project was by architect Antonio del Grande, it was then integrated by Gian Lorenzo Bernini, Johan Paul Schor and Carlo Fontana in the last decade of the seventeenth century.

From the very beginning, the Gallery was conceived as a huge state room, which was to celebrate the victory of the Christian fleet over the Turks at the Battle of Lepanto in 1571. The commander of the papal fleet, Marcantonio II Colonna, is depicted numerous times throughout the vault of the Great Hall of the Gallery and in the Hall of the Battle Column.

The vault fresco in the Hall of the Battle Column is the work of Giuseppe Chiari and depicts the presentation of Marcantonio to the Virgin Mary in heaven. The hall was named after the column of red marble on a pedestal located at the center of the room, which recalls the family coat of arms. The carvings represent ancient Roman military scenes. Among the many works of art to be found in the Hall of the Battle Column, we would like to point out the beautiful painting by Bronzino, Venus, Cupid and a Satyr. Of particular interest are the three large paintings by Michele di Ridolfo del Ghirlandaio: The Night, above the painting by Bronzino and, on the opposite wall, Aurora with Venus and Cupid.

On the short flight of stairs leading to the Great Hall, it is possible to see a cannon ball that landed right there in 1849 during the period of the Roman Republic. It was fired by the French Army from the Janiculum Hill, under the orders of General Oudinot, who arrived at Porta San Pancrazio to rescue Pope Pius IX from the Republican insurgents, including Mazzini, Armellini and Saffi, who occupied the center of Rome for a few months.

As you proceed towards the Great Hall, we would like to point out the four large mirrors painted by Mario dei Fiori, Giovanni Stanchi and Carlo Maratta, along with the impressive series of masterpieces by Guercino, Salvator Rosa, Jacopo Tintoretto, Francesco Salviati, Guido Reni, Giovanni Lanfranco and many others.

We suggest you walk around freely in this beautiful space, amongst the paintings, sculptures and precious furnishings which are the heart of the family art collections bound by the fidecommesso (a trust) since 1800. The artworks are inextricably tied to the walls of the palace and may not be alienated nor divided, which is the best way to guarantee their preservation over time.

If you would like to have more information on the Colonna family, the Palace and its furnishings, please feel free to consult the publications available to our visitors at the four main points of the Colonna Gallery: The Entrance Hall, The Blue Room, The Hall of the Battle Column, and The Hall of the Landscapes.

After leaving behind two majestic columns coated with yellow Siena marble, you find yourselves in the Hall of the Landscapes, which took its name from the numerous paintings of rural subjects by Gaspard Dughet. The vault, depicting an allegory of the Battle of Lepanto, was executed in the late 1600s by Sebastiano Ricci. The large cabinet made of ebony and ivory, the work of the German Steinhart brothers, depicts scenes from the Old and New Testament and, in the center, is the Last Judgment that Michelangelo painted in the Sistine Chapel in the Vatican. On the opposite wall is a cabinet made of sandalwood and precious stones depicting a Roman villa of the time. Note that all the console tables in the gallery, including the above mentioned cabinets, are supported by submissive figures representing the defeated Turks at the Battle of Lepanto.

As you continue your visit, you enter the Room of the Apotheosis of Martin V. The room was named after the large canvas by Benedetto Luti at the center of the ceiling depicting the presentation of the family pope into heaven. This room is filled with important masterpieces: Il Mangiafagioli (The Bean Eater) by Annibale Carracci, dating from the late sixteenth century, is among the most famous ones and depicts the meal of a peasant. Three centuries later, the artwork is said to have inspired impressionist painters such as Van Gogh and Degas. Above the Mangiafagioli is a valuable panel painting by Bronzino, The Virgin with Spleeping Child, St. Anne and the young St. John the Baptist. On the upper right side of the fireplace is St. Julian the Hospitaller by Perin del Vaga and, below, the Portrait of Composer Adrian Willaert at the Spinet by Jacopo Tintoretto. On the central wall, Time ravishing Beauty by Il Cavalier D’Arpino, The Rape of Europe by Francesco Albani, the Penitent St. Jerome in the Desert by Perugino and The Holy Family with St. Sebastian, St. Jerome and Mary Magdalene by Paris Bordon. And again, the Crowned Virgin by Andrea del Sarto, the Self Portrait with Cameo and the Raising of Lazarus by Francesco Salviati.

On the seventeenth-century Roman console table opposite The Bean Eater, is a Carrara marble bust of Cardinal Girolamo I Colonna, commissioner of the Gallery, carried out by Orfeo Boselli in the mid 1600s. On the left of the console table is a valuable painting by Jacopo Tintoretto depicting Onofrio Panvinio, a very well known Augustinian historian of his time and on the right, Portrait of a Gentleman by Paolo Veronese.

Moving on to the next room, we step into in the Throne Room, once again dedicated to the family Pope, Oddone Colonna who was elected on 11 November 1417, St. Martin’s day, which is the reason why he chose the name Martin V. During his pontificate, which lasted until 1431, Pope Martin V had his permanent residence at the Palazzo Colonna, which became the papal seat for about ten years. The throne facing the portrait of the pope was reserved for papal visits up until 1870, when it was common for popes to visit the palaces of the ancient families of the Roman aristocracy. On the left and on the right of the portrait of Martin V are two small portraits by Scipione Pulzone depicting Marcantonio II Colonna, the victor of Lepanto, and his wife, Felice Orsini, as well as the oldest paintings of the entire collection: Madonna with Angels by Stefano da Verona, and The Crucifixion by Jacopo Avanzi, both dating back to the fourteenth century. In the following room, the Tapestry Room, you will admire the large seventeenth-century Italian tapestry depicting Queen Artemisia  examining the project for the tomb of her late husband Mausolus. There are also numerous paintings of exquisite workmanship. Among the many, The Massacre of the Innocents by Jacopo del Sellaio, The Reconciliation of Esau and Jacob by Peter Paul Rubens and the Ecce Homo by Francesco Bassano the Younger.

The Yellow Room, or entrance hall, is placed between the Tapestry Room and the Room of the Chapel. The wall frescoes are the work of the brothers Giuseppe and Stefano Pozzi (authors of the figures) and Giovanni Angeloni (landscapes and ornaments) and date back to the mid-fifties of the eighteenth century. They represent idealized views of villas with spectacular trompe-l’oeil effects, as the two wreaths of stucco relief connecting the walls to the ceiling.

From this room two doors give access to the Room of the Chapel where a number of tapestries from the series dedicated to  Queen Artemisia can be found: the two tapestries next to the window and the one on the entrance wall date back to the beginning of the seventeenth century (manufacture of Paris  Boulevard Saint- Marcel). Among the many interesting paintings, of particular interest is The Resurrection of Christ and of Some Members of the Colonna Family at the End of Time by Pietro da Cortona. In the same room you can also admire the painting by Guercino, Moses with the Tables of the Law. The Murano chandelier you see in this room (eighteenth century) is the largest in the whole palace.

The Chapel, visible from this room, houses the paintings, The Holy Family by Giuseppe Bartolomeo Chiari and  Deposition after the school of Paolo Farinati (sixteenth century). On the left is a stained-glass window depicting the translation of the body of the Blessed Margherita Colonna from Castel San Pietro to the Roman church of San Silvestro in Capite (1283).

In the Room of the Old Masters’ Paintings it is possible to admire a superb French tapestry (same manufacture of Paris  Boulevard Saint-Marcel) dated to the early 1600s, depicting the Queen Artemisia watching her son, prince Lygdamis, taking a riding lesson. The tapestry recently underwent a major cleaning and restoration work in Brussels at the Royal Company De Wit (2011-2012). The room also houses an impressive collection of paintings depicting sacred subjects from the fifteenth to the seventeenth century. Among the many, it is worth mentioning two small paintings, Madonna and Child (also known as the Madonna of the Zodiac because of the zodiac signs appearing in the background) and the Virgin Annunciate, by Cosmè Tura, one of the most famous artists in Ferrara, St. Augustine by Carlo Crivelli, Madonna and Child with Saints by Jacopo Palma il Giovane, Saint Anthony Abbot and a Bishop Saint by Pietro Alemanno, The Adoration of the Shepherds and Christ among the Doctors by Bernardino di Mariotto and the Birth of the Virgin and Two Kneeling Donors in a Landscape, by the so-called Master of the Colonna Predella.

The Room of the Embroidery takes its name from the fine “Indian-style” tapestries on the walls, dated to the mid-seventeenth century and woven with a technique that combines gold and silk threads. The central canopy shows the Colonna and Pamphilj coat of arms celebrating the marriage between Philip II Colonna, son of Lorenzo Onofrio Colonna and Maria Mancini, and Olimpia Pamphilj in 1697.

Next to the Room of the Embroidery is a small vestibule with mirrors, painted in the mid-eighteenth century, leading to the Room of The Apotheosis of Martin V.

If you are interested in booking a private visit of the whole Gallery and  the Princess Isabelle’s Apartment, please contact the offices of the Colonna Gallery on +39 06 6784350 or by email info@galleriacolonna.it.